PTI (Patent Translations International) has been translating patents for over 18 years; prior to that we were translating patents (and all manner of patent-related material) as Aktuel Translations since, well … since I was a nipper. In fact, the first patent we ever translated was for an attorney in Brighton in 1992, and I had to check why it kept saying ‘Characterised in that…’ As someone who’d spent the last four years reading Proust at university, I was upset … I felt, quite strongly, that some variety was called for.

We’ve come a long way since. Nevertheless, I was very conscious from the start of NordicIPR that Service Provider does not a Master Make: swimming in the same pond for years helps, but what actually goes on in the world of the practitioners is something else, obscured by the fronds of law and the gloom of my own stupidity. So, proximity is only the start. For example, the part of France where we live goes in for duck farming: being neither a farmer nor, even less, a duck, I don’t really know what goes on past the hedge at the bottom of the garden.

In short, I was at Nordic IPR to shut up and listen.

First on the stump was the clever and charming Frida Ekeberg – Head of the Patent Department, Swedish Patent Office – who rightly stressed the need for academia to get involved with managing value in IP, for the need for a value chain between R&D–Assets–Innovation. She then went on to talk about AI: can a computer take an inventive step? And the famous monkey selfie that brought about the judgement that copyright can only be owned by human intelligence.

Patrick Kim, founder of Bridge Builder, spoke interestingly about quality versus quantity of filed patents and questioned the need to file 1000s of patents. He emphasised, instead, the need to be strategic.

In my experience, there are themes to most conferences. As gatherings go they tend to reflect the zeitgeist. Pity the person who speaks last as they are invariably repeating what everyone else said on day one, unless they are willing to get up bright and early and edit all their slides.

As a committed entrepreneur, the themes over the last couple of days were all encouraging. Companies that invest in R&D (who invent) are like publishers: their value resides in their catalogue of creativity and THAT should never be allowed to lie dormant. It strikes me that employing innovative and/or offensive strategies to one’s back catalogue of patents is an obvious and highly satisfying route to income streams.

There seems a genuine desire to see the departments of R&D, IP and Marketing not as different camps, more as strands in a lucrative supply chain. Bobby Mukherjee from BAE Systems made a very good case for this on Day 1 of the conference.

It wasn’t all about offensive strategies in IP, there were interesting talks on defensive work: I learned about Trolls and Cockroaches from Dr. Jochen Dörring at Brita and methods to combat counterfeiting (and the scale of the problem) from Klaus Berg at Philip Morris International.

Key sponsors, Kemp, spoke amongst other things about how to handle contentious matters (it was very nice to see a familiar face on the first day in the form of Dan Cooney).

I love Copenhagen – I’d happily go there, on the flimsiest of excuses – and I enjoyed the last two days.

Note: I’m well aware that this is just a very brief run down of what went on and I apologise to those not mentioned. I’d been travelling non-stop for 48 hours on very little sleep and I did take a break for a couple of hours! 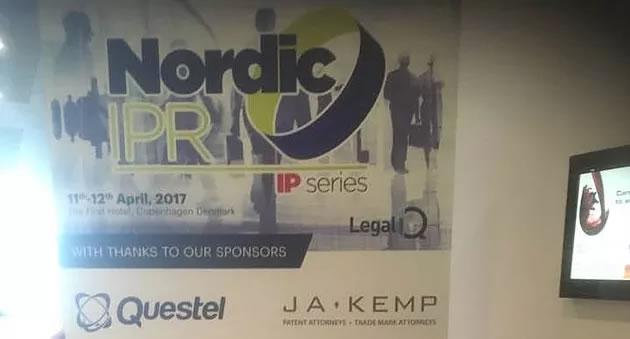