I’ve been on a plane 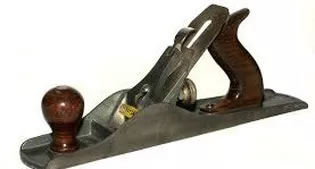 We arrived back from our travels to find our perfectly flat wooden flooring in France had gone rogue: it now undulated like waves in a small harbour.

After previous incidents that I would call ‘learning experiences’ but H talks about as national catastrophes on a par with the Eiffel Tower disappearing into a sinkhole, I solemnly gave my word I would never touch another power tool as long as we both drew breath.

As soon as H had gone to the shops, I changed my trousers and went to the barn with a great sense of optimism, to hunt out a jigsaw I bought when I built a kitchen in our Clapham flat.

The problem was simple: the floor had expanded in the heat and was too ‘long’.

I would make it shorter.

It was a win win – we’d be back to non-corrugated flooring, and everyone would be so impressed I could revert to my old ways of taking a lump hammer and gaffer tape to any DIY problem around the house.

Turns out jigsaws have a shelf life. I last used ours about 10 years ago and it had got used to its retirement. Seconds after I turned it, on flames with sparks started coming out of the plastic casing, as I flayed about with it in my hand. Briefly, I looked like Zeus.

Coming to my senses, I turned it off at the wall and spent the next five minutes getting my breathing and pulse back to normal before deciding that, actually, it was only a minor blip and I would press on.

Old school, I thought when I saw the plane, back to basics. From woodwork lessons at Downside, I remembered the calming effect planing wood has on a person and sure enough, within five minutes I was even thinking of a career change: I would turn my back on mammon, lead a blameless life. I would carpent (= redemption + woodwork).

Time passed and my soul healed.

When I finally blew off all the shavings, I saw that my work had done the trick, the bit of flooring in my hand was noticeably thinner. Much thinner. The cold dark shadow of foreboding fell across the worktable and I walked slowly back to the house with a rising sense of dread.

I think now is the time to tell you about our underlay.

Underlay, in my experience, is usually a neutral colour: russet, Sherwood green or taupe. For some reason, ours is made of a sort of super shiny material cute aliens on 70’s episodes of Star Trek always wear. Captain Kirk was always a sucker for gold lame.

The underlay now shone through the floor with the intensity of the sun. It was as if I had just chiseled away the planking to discover a hidden world – a happier place of light and colour below our feet.

Perhaps that’s how I would sell it to H?

Bollocks, I thought, reality flooding in, that won’t even work on the children. Nothing for it, I will have to cover my tracks.

Mastek will be my friend.